A hand held shower head is a favourite among the elderly population.

I recommend many pieces of equipment, but the handheld shower head is one piece of equipment that the elderly often request.

A hand held showerhead is a device that hooks up to your regular shower access.

It has an extendable hose so that you can hold the showerhead in your hand and move it freely around your body.

It allows elderly to adjust the temperature of the water before pointing the shower head at themselves, allows them to get wet in all the right places without having to move around too much and can be used easily from a seated position.

As elderly parents lose their mobility and flexibility, it is harder and harder to move around freely and to get water onto all those "hard-to-reach" areas.

A hand held shower can solve this problem.

Any elderly person that is having difficulty with flexibility and reach.

If they also have balance, strength and endurance issues, they may benefit from a hand held shower head as it can be used more easily in sitting.

It will also allow them to access the shower while it's still dry, decreasing falls risk.

Hand held showerheads are handy for elderly who receive assistance with their bath. It makes it much easier and safer for the caregiver as they have to do less bending and get into less awkward postures.

Who Should NOT Use?

There is no reason I can think of that a hand held shower head shouldn't be used for the elderly. 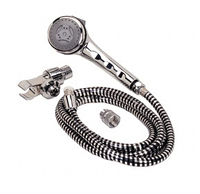 Make sure the cord is long enough. They vary in length from around 50 to 72. A longer hose may ben needed if your elderly parent plans to put the hand held shower head into the slot on their bathtub chair.

This is nice if the senior is showering in sitting so that the height of the shower can be changed to accommodate. This will also allow the holder to be low enough they can access it from sitting.

Though this can be a bonus on your water bill, it can also allow the water to be turned off (decreasing confusion and excessive wetness) during washing or shampooing. This can make a shower easier to handle for someone with poor flexibility and difficulty with too many things going on at once.

Many of the hand held showerheads come with an extra wall mount bracket for the shower arm.

These are helpful for being able to hang the shower head during the shower, ie. if the senior want to pause to use the soap or shampoo.

I've seen some elderly put the shower head on the ground when they weren't using it and this can get the whole bathroom very wet and messy! 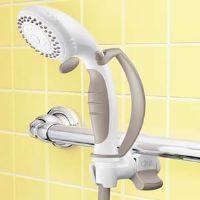 There are a number of accessories for hand held shower heads including:

I have personally tried to fit several different types of hand held shower heads for elderly clients and find them quite difficult to install.

I found both cumbersome to put in and they did not always work properly after. The directions are often not explicit enough either.

Now, I am an occupational therapist, and though I can take a wheelchair apart and put it back together without an issues, I'm not the most mechanically minded person.

I would recommend that you have a friend or family that is handy install the shower head for you. Be sure to try it and all the features before they leave.

It may be easier than I think as well. You could try following the directions carefully on the package first.

Another option is to buy it at the medical supply store and get them to install it for you (you may as well get some bathroom grab bars at the same time to save money on travel and installation costs!).

A handheld showerhead can improve independence and safety when showering.

They can be used in a number of ways, depending on the needs of the senior.

They can be used to allow the elderly to get into a dry bathtub, decreasing the risk of falls. They can adjust the temperature of the shower before pointing the water at themselves.

It is easier for people with decreased flexibility to get wet all over and can be hung or paused while they soap up or shampoo themselves.

Handheld shower heads can also be reached from sitting (if they have a slide tube or a wall mount) and can be used in sitting.

How Much Do They Cost?

Hand held shower heads vary a lot in price depending on quality. You can buy one for as cheap as about $20 but they can be up to $750+ for the fancy-schmancy upscale versions.

If you are looking for a handheld shower head that has a slide tube and a place to easily hang the hand held showerhead, it would likely be between $50 and $150 dollars.


Return to Bathroom Products for the Elderly

Return to Equipment For Seniors

Return to Caring for Aging Parents

Have your say about what you just read! Leave me a comment in the box below.

How to Choose an Elderly Medical Alert

How to Choose a Chair Lift for Stairs

How to Choose Scooters for Elderly

How to Choose Life Insurance for the Elderly

How to Choose Phones for Elderly