Choosing the right phones for elderly can make life easier (and safer) for your aging parents.

We use our phones everyday without thinking about their design. However, many phones we use are not well designed for the elderly.

Most phones have small labels, small buttons, are not loud enough and have too many features that confuse seniors (and even those who aren't seniors!).

Your parents might be having difficulty with their current phone because they have hearing loss, vision loss, limited mobility and/or memory loss.

Being able to easily use their phone can allow them to remain independent and call for help in an emergency.

To make it easier to find what you are looking for, I've grouped features that help seniors with specific issues such as hearing, vision, memory and mobility. I also discuss web cams, cell phones for elderly and elderly medical alerts. 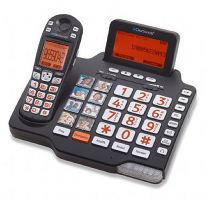 Phones make our lives easier. They allow almost instant communication with friends and family both local and around the world. However, they can also be frustrating for elderly with hearing, vision or memory issues.

What would you do if you couldn't use your phone? You'd probably feel frustrated, disconnected from friends and family, a loss of independence and isolated.

A phone is a simple everyday device that can greatly impact our lives.

Aging can affect seniors in a variety of ways. It can decrease their physical strength and balance but it can also affect their senses.

Many seniors experience decreased vision as well as hearing. They may also have short term memory and fine motor issues (such as unsteady hands).

These changes can affect their ability to use "regular" phones. They may have difficulty reading the buttons, pushing the buttons, hearing the caller, remembering phone numbers and even using the phone (some new phones are feature packed and require a thick instruction manual to figure out).

There are phones for elderly designed to meet all these needs.

For Elderly with Hearing Loss 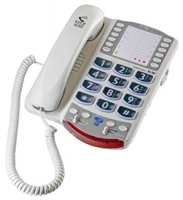 Hearing loss is very common and can be frustrating for both the senior and their friends and family that call.

Missed phone calls, repeating yourself and not knowing if others have heard you are all common problems.

There are amplified phones for elderly with features that can help.

For Elderly with Low Vision 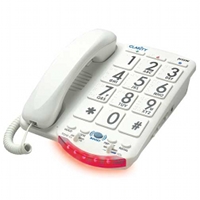 Many seniors also have low vision so this makes it difficult to read the small print on many of todays modern phones.

Phones for elderly include features such as:

For Elderly with Memory Loss 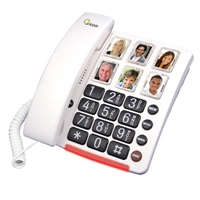 Memory loss is also common among the elderly.

There are many phones for elderly with large picture speed dials. These can be programmed with frequently called numbers and their respective pictures so all the senior has to do is push the button with the photo of who they want to call.

No need to look up their number and dial it. This is a very worthwhile feature for seniors with memory loss. It can also prompt seniors to call friends and family which helps them stay connected.

Seniors with memory loss can have difficulty with cordless phones as the user can often forget to charge the phone or misplace the phone. Having a regular corded phone for when the batteries of the cordless are drained or when there is a power outage is a good idea.

Cell phones with calendar features can remind users of appointments, to take medications, etc. Models are constantly changing so it is best to choose one that is simple to use and intuitive.

For Elderly with Limited Mobility 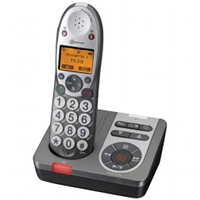 I know many seniors who carry their cordless phones with them - or on their walker - wherever they go in the house.

The disadvantage is listed above, seniors with memory issues often forget to charge the cordless phones and forget where they placed them.

This can be frustrating for both the senior and those trying to call them. I know I've had to travel across town to check on my Grama as her cordless phone was misplaced and the battery was drained.

The internet has changed our lives and web cams are a great way for seniors to stay connected with friends and family.

Internet based web cam programs such as Skype allow seniors to see and hear their loved ones.

Many of todays video phone programs run on almost all computers and are simple to use.

They may have to be set-up or programmed in the beginning but many seniors can use them after that.

The best place to set-up the computer is in the kitchen, living room or any central place where the web cam program can be logged in.

This allows callers to reach them much like a regular phone. 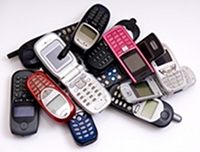 Cell phones for elderly are not only convenient but also a valuable safety tool. However, most cell phones are not designed for elderly, particularly those with difficulty hearing, vision, memory and other issues.

Many cell phones have small screens and buttons, can be complicated to use and have limited volume adjustments. These are not well suited for elderly.

However, there are models designed specifically for the needs of elderly. Some models even have a large emergency button similar to elderly medical alerts but can be used outside.

Elderly that live alone and are at risk of falling should seriously consider purchasing an elderly medical alert system.

They provide peace of mind for both seniors and their family members.

They are much like insurance - hopefully you never have to use it but you are happy you have it when you really need it.

I've worked with seniors who have not had an elderly medical alert and spent hours on the floor waiting for someone to stop by or hear them yelling for help.

I've also worked with seniors who have used their elderly medical alert and the ambulance was there in minutes to help them.

Return to Caring for Aging Parents

Have your say about what you just read! Leave me a comment in the box below.

How to Choose an Elderly Medical Alert

How to Choose a Chair Lift for Stairs

How to Choose Scooters for Elderly

How to Choose Life Insurance for the Elderly

How to Choose Phones for Elderly